Forest vs. Trees in Marc Singer’s Breaking the Frames

So, over Christmas I was watching A Christmas Story for the bajillionth time (as one does) and noticed, in the scene were Ralphie is decrypting the message from his Little Orphan Annie Decoder Ring, a Sunday newspaper comic peeking out among the stuff on a table: 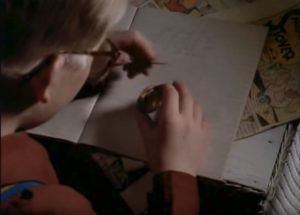 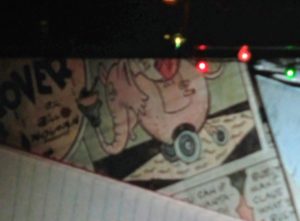 I took a picture of the strip and quickly posted it to twitter (as one does), completely ignoring the obvious title on the left and opining that this was most likely Dr. Seuss’s (AKA Theodor Geisel’s) short-lived newspaper strip, Hejji. The strip is in fact Smokey Stover by Bill Holman. Absent the title, though, it’s easy to understand why I might have mistaken the art for Seuss’s. That elephant is nearly identical style-wise to Seuss’s drawing style–and specifically to Seuss’s famous elephant character, Horton. Here, for example is a typical Seuss elephant: 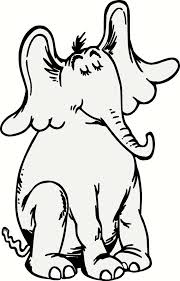 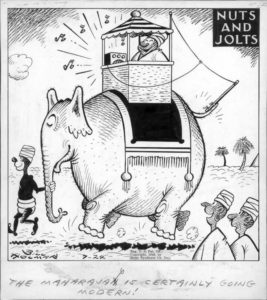 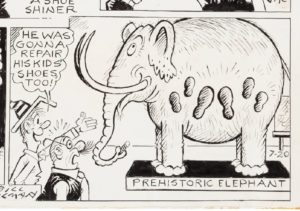 You don’t even need to be a particularly keen observer of stylistic cartoonist quirks to see the obvious influence here. While I couldn’t track down the particular Smokey Stover strip shown in A Christmas Story, I’d bet dollars to doughnuts that it predates 1954’s Horton Hears a Who significantly–especially if any attention at all was paid to keeping things in-period for the film, which seems to take place roughly in the early 40’s.  Here’s a full Smokey Stover Sunday page from, I believe, around 1940: 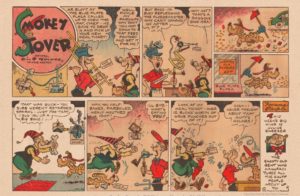 What I found interesting here wasn’t just the obvious stylistic homage (“stylistic homage” being the term we cartoonists use vs. the lay term “blatant swipe”) but that this obviously highly influential American comic strip is rarely discussed and not even collected in this, the “golden age” of newspaper comic strip collections where you can find full runs of everything from Prince Valiant to White Boy and even The Wiggle Much at your fingertips. And unlike strips such as White Boy or The Wiggle Much, Smokey Stover was immensely popular with the everyday public. At the strip’s height in the late 40’s, the titular lead character of the strip may have been the single most used figure for nose art on U.S. WWII bombers. 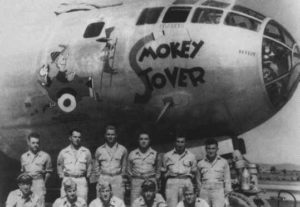 As with some other very popular newspaper strips of the time, Smoky Stover introduced a number of now-common phrases into common usage, most notably the term “foo fighter.” Smokey, a fire fighter, referred to himself as a “foo fighter” (one of the strip’s many bits of odd verbiage and wordplay) and the phrase was  adopted by WWII pilots to refer to night-time flying targets which couldn’t be identified–UFO’s. If you know the phrase these days, it’s likely because of Dave Grohl’s post-Nirvana band of the same name.

The strip’s influence on comics, though, is curiously less apparent.  Harvey Kurtzman has gone on record as having been influenced by Smokey Stover, specifically citing it as the origin of a lot of the nonsense words that peppered MAD Magazine (potrzebie!) as well as possibly the famous visual “chicken fat” scattered around the magazine’s pages. Beyond that, though, it’s hard to find much of a Smokey Stover vein of influence in other comics… at least here in the U.S.

Interestingly, a place I really do see a possible strong Bill Holman influence is in some British cartooning of roughly the same period. If you’ve ever seen early material from the British kids’ comics magazine, The Beano, you’ll note some strong stylistic similarities with Holman’s strip–both visually and in the style of humor. Visually, the most obvious example is Beano cartoonist Leo Baxendale. Here’s one of his strips: 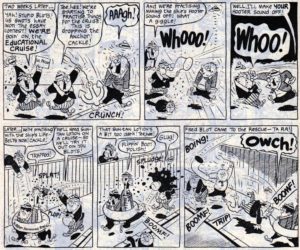 In addition to the obvious visual similarities, Bexendale’s work–and in a general sense, a lot of early Beano strips–share Bill Holman’s screwy, madcap sense of humor. I’ve not seen any specific mention of Smokey Stover running in U.K. papers, but there were certainly many popular U.S. strips that did, so I’d consider it a reasonable supposition that Stover may have. (And if anyone can confirm this or has specifics of where/when it ran in the U.K., please comment or email!)

So, then: why isn’t Smokey Stover a strip that’s more talked about, held in higher regard? Well, to be blunt I’d say some of it is simply that Holman isn’t a cartoonist with the same level of visual chops as folks like Herriman, Segar, etc. But also, though, Smokey Stover is part a tradition of “screwball comics” whose humor is primarily goofy and gag-based–think Gus Mager, Rube Goldberg, Milt Gross. The whole “screwball” style of humor, even in films, fell solidly out of fashion in the U.S. shortly after WWII… but seems to have persisted in some form or another much longer on British shores with things like The Benny Hill Show, The Goon Show, Monte Python, etc.

Comics like Krazy Kat, Popeye/Thimble Theater, and Peanuts all broadly traffic in humor, but they each have an undercurrent of melancholy or even occasionally the macabre that lend them a more ostensibly “serious” air; Smoky Stover is pure screwball nonsense–and I mean that in the best sense of the term.

Holman’s Smokey Stover will likely never be held up with the same lofty regard as Herriman and his like, but it’s odd how such an obviously influential and hugely popular strip seems to have been swept under the cultural rug.