Cartoonists (and, one assumes, other artists as well) have a fascination with seeing each other’s work areas. Thanks to the advent of digital cameras and “the internets,” message board threads, blog posts, and even entire books showing cartoonists’ studio areas are flourishing. It’s an understandable fascination–you get to see how the “pros” work, and you might even glean some useful information about materials or techniques. My favorite example of this sort of “cool studio stuff” web entry is by cartoonist Dave Cooper, in his Flickr photoset, “some of my favorite art nerd things,” which shows off some of his coolest tools, including a straight-up ridiculous ink holding contraption.

I’m game to contribute a bit to this almost-a-meme sharing of studio pics–and I do, I have to say, now have a pretty sweet studio here at the Crackhouse–but at the moment I’m in the middle of painting some new shelves that have recently been installed and now isn’t really the best photo op time. So, instead, I’m gonna jaw a bit about something that I think most cartoonists probably have as an element of their work area, but which I rarely see discussed–specifically, the collection of reference materials that I keep (literally) in arm’s reach of me as I draw. With embarased apologies to anyone nerdy enough to recognize the term from the Magic: The Gathering card game, I’ll refer to it as my sideboard.

I’ll begin with the item I think I reach for more than any other in my sideboard, Jack Hamm’s Cartooning the Head and Figure.

I do all the stuff that art teachers always tell you to do–I keep a sketchbook, I draw in it from life, I even do 2-3 hours a week of nude figure drawing with a local group–but sometimes a shortcut or two comes in handy. And that’s what Cartooning the Head and Figure is: a cartoonist’s cheat sheet.

This book is chock full of great useful stuff you can take in at a glance. Struggling with a particular facial expression? No problem. Hamm’s book has got pages of stuff like this: 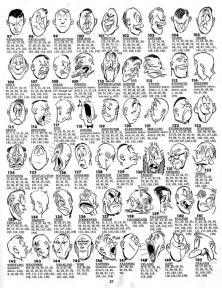 Did I mention there’s three or four pages like the above? Not only are the expressions great, but every one is a beautifully drawn cartoon face. Hamm’s from the era where cartoonists and commercial illustrators had to have serious chops to even think about getting work. Like it says in the great Dan Clowes art school spoof, Art School Confidential, “If you wanna do that Picaso stuff, take it to Paris!”

Speaking of Dan Clowes, I always struggle with that classic 50s “cartoon walk” that Clowes used to use in a lot of his early work (ya know, before he was all “Nabokovian” and shit). No problem… Hamm’s got it covered. Check out this great “walk wheel.” It’s from one of the nine pages in the book that deal specifically with drawing characters walking and running. 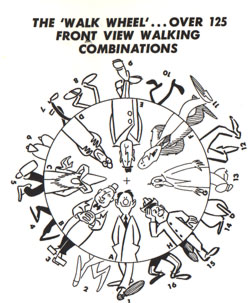 The book is only 120 pages long, but it’s jammed with stuff like the sample below–pages and pages of noses, eyes, ears, gloves, hats, hands… and characters sleeping, and pretty girls, and characters writing, and how to draw crowds. 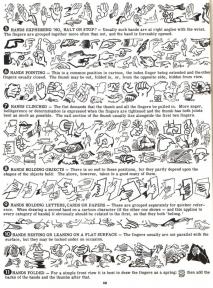 Oh.. and I’d be remiss if I didn’t mention this essential how-to section, sadly lacking from most modern texts, “Hobos and Tramps.” (I plan on remedying this situation with my forthcoming analytical cartoon text, Understanding Hobos.) 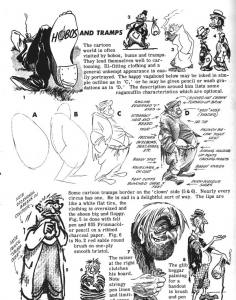 Although not particularly germane to its use as a sideboard item, the book also contains some interesting information on unusual (at least for the modern era) cartooning techniques and tools–things like how to use a gauze ball affixed to a match stick and dipped in white paint as a texturing tool.

Jack Hamm’s Cartooning the Head and Figure was published in 1967. You can find a soft cover copy for as little as .75 cents on Half.com. Buy one, ya cheapskate.