AlphaBands – Q is for Queen Latifah

AlphaBands: R is for Rick Rubin

Despite the beautiful cartooning (and obvious historical importance) of Milt Caniff’s Terry and the Pirates, I have to admit I’ll always bear it a grudge. It’s the strip that seems to have firmly and permanently cut off the formal/visual development of comics as its own unique medium and solidified the visual language of comics we have today–a visual language that’s largely derived from film.

I guess I shouldn’t be surprised that pretty much any critical discussion of the artwork in modern comics is now couched in film terminology–what “shots” the artist chose, what “camera angles.” Here’s the thing, though: comics aren’t made with a camera. They’re drawings.* And when we talk about and think about comics using film terminology, we’re not only confining ourselves to only engaging with certain aspects of the medium, but (for those of us who make comics) we’re confining ourselves to only telling stories in certain ways. 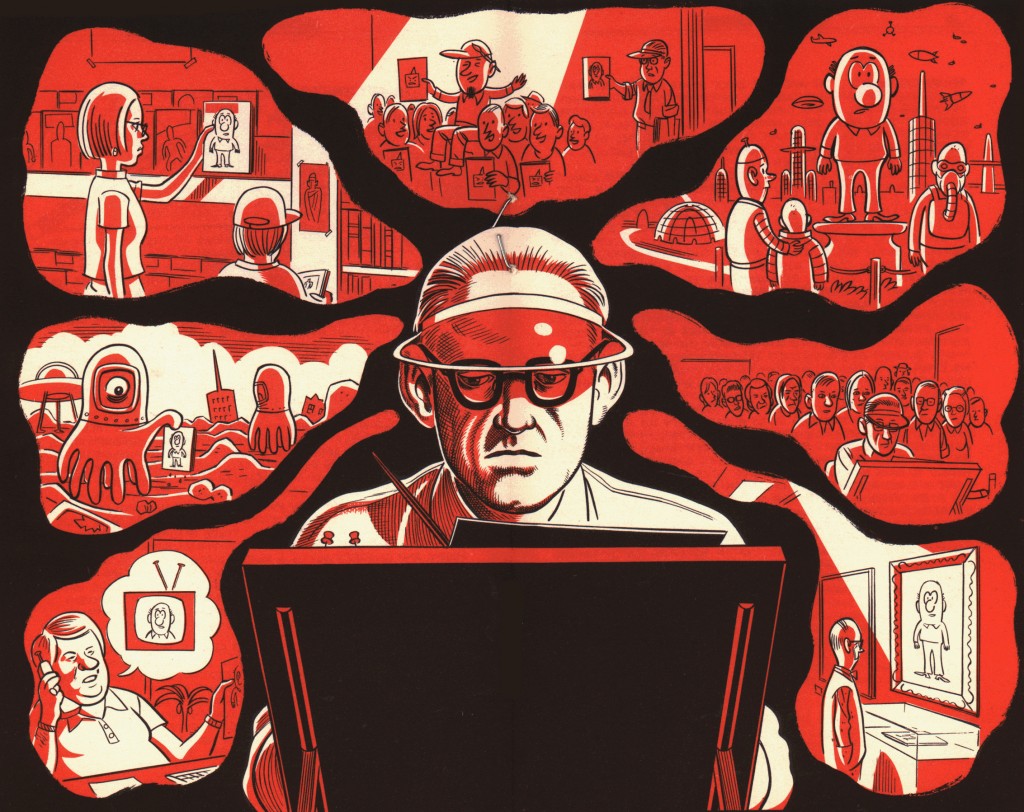 What follows are some fairly random and disordered thoughts I’ve had over the last few years spurred by my own personal ruminations and by some Twitter conversations I’ve had on the subject. Is it possible I’m completely wrong? Maybe. Will people ever stop talking about “camera angles” when discussing comics? Probably not.

Well how the heck else would you make comics?! (part 1) – Before the formal language of comics got inexorably mixed up with the language of film, comics got along just fine. Look at pre-WWII newspaper comics. Often these strips were staged with the characters’ full bodies visible in most of the panels–and viewed directly head-on from eye level. I love the amazing clarity and straightforwardness of strips like this: 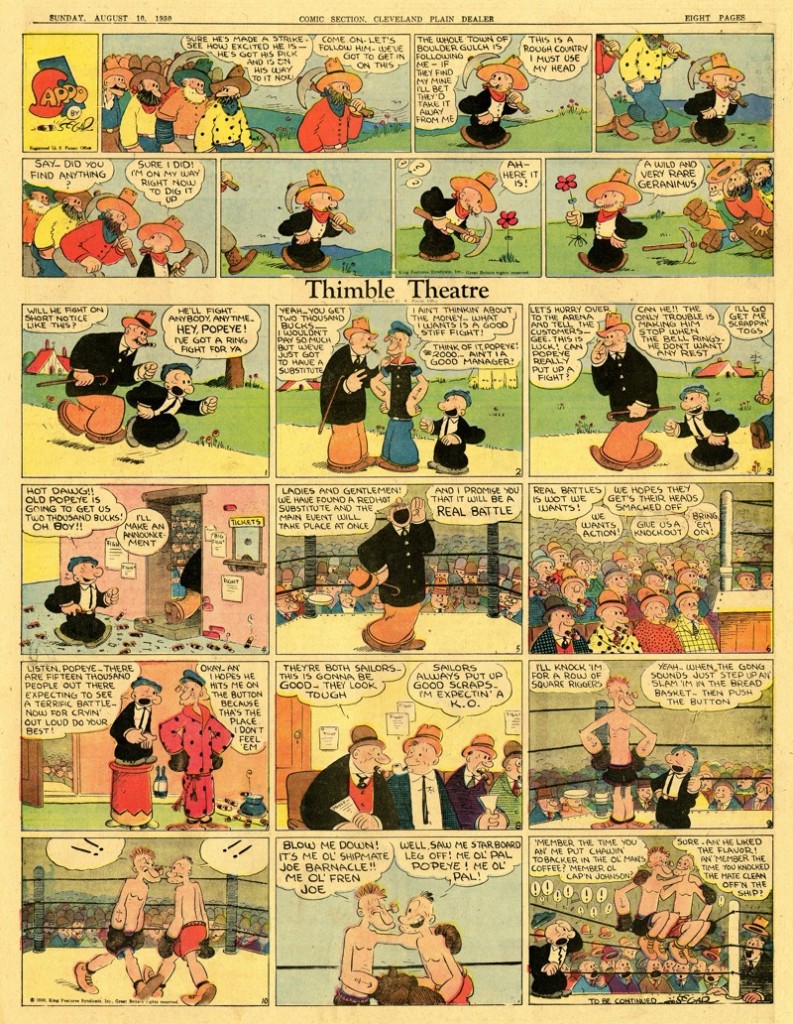 A lot of later newspaper comics adopted these straightforward ways of staging, either because of tradition or as a response to the shrinking size of the comics page. I think there’s a reason you can hand the average non-comics reading adult a Peanuts collection and they can engage with it readily, but that same person would likely find the most recent issue of Spawn impenetrable.

In fact, I think this type of staging is comics’ most natural (for lack of a better term) mode, which is maybe part of the reason these sorts of comics communicate so clearly. I teach comics classes for kids and almost to a person, this is how kids will stage a comics story–eye level full body views of the characters, no “camera angles”:

On the other hand, though, pre-film influence comics were developing their own unique formal language. My mind boggles at the amazing formal “toolkit” we might have at our disposal today if comics like these had been the primary influencing force on comics’ visual language rather that film: 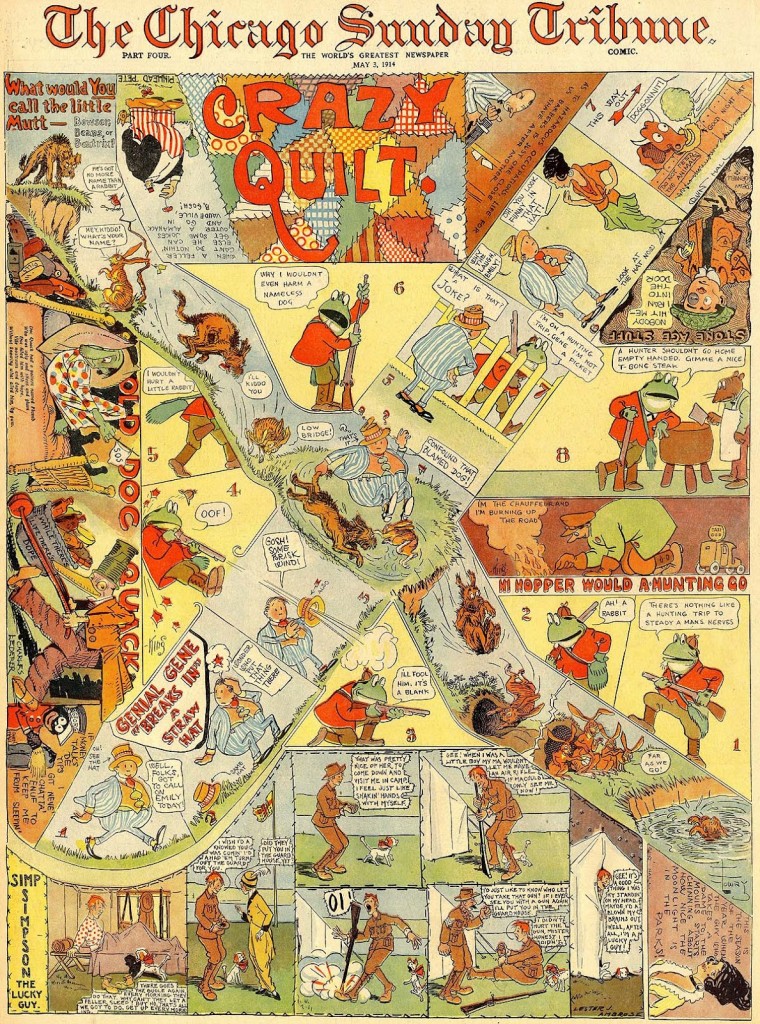 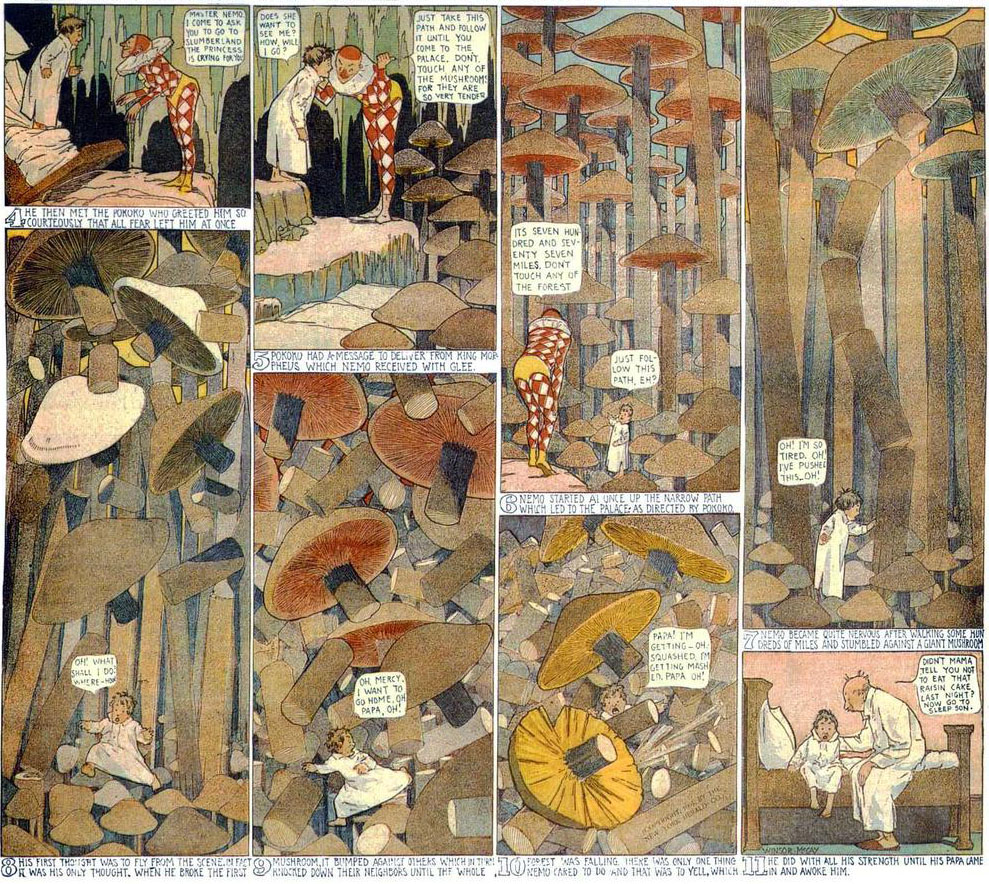 Well how the heck else would you make comics?! (part 2) – Some of the most highly lauded recent comics and graphic novels have been from creators who are either deliberately or just naturally not using filmic visual language. What “shots” are these? What “camera angle” is being employed? 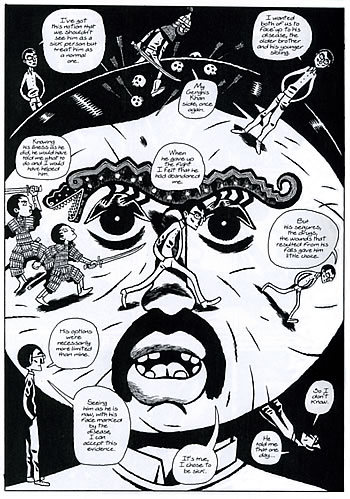 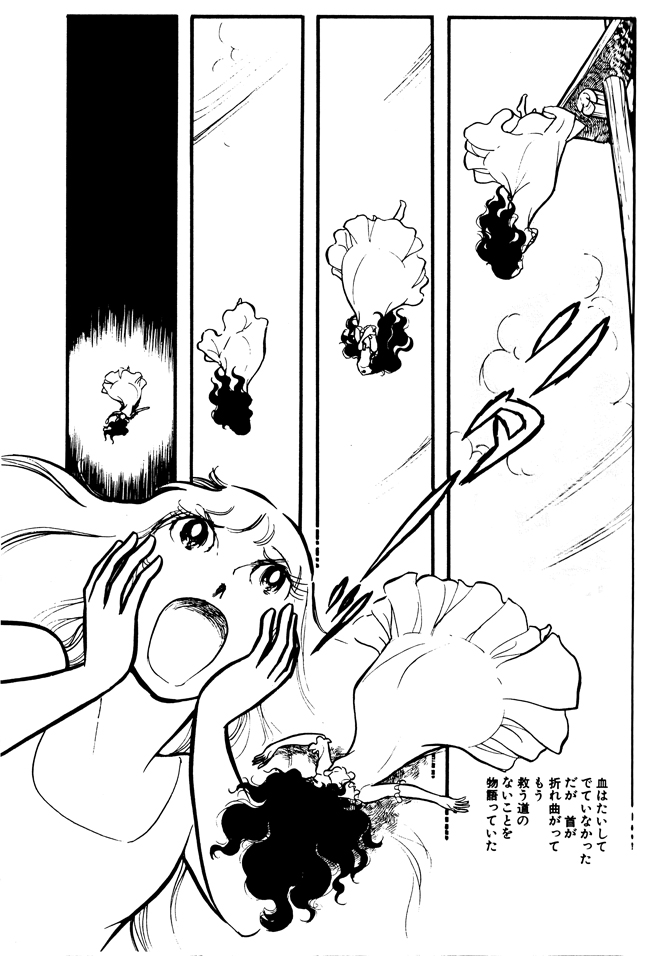 The recent “pizza dog” issue of Hawkeye employed a bunch of Chris Ware-esque formalistic/diagramatic devices and apparently it just blew people’s minds. Why are these sorts of formal devices employed so rarely?

But comics and film have so much in common! – I hear this all the time, but when I press the issue the response I usually get is, “They’re both visual narrative… and, uh…” Notwithstanding the fact that neither film nor comics are necessarily narrative in nature, this is just about the only thing that I can think of that the two media have in common. Everything else–physical scale, shared vs. private experience, drawings vs. actual pictures of things, multiple static images vs. illusion of motion, the way time is controlled/experienced, etc.–seems to me to be radically different. They’re different things and we should think about and discuss them differently.

Comics is a mish-mash. Why not borrow terms from other forms of art? – I’d be totally fine with borrowing terms from other forms (plural) of art, but in point of fact we’re taking terminology and concepts from one form of art: film. I’d love to see applicable terminology from graphic design, theater, poetry, information design, etc. being used to discuss comics. Talking about cadence, balance, line quality, rhythm, unity, repetition, staging, composition, blocking, etc. all make a heck of a lot more sense applied to comics than talking about a “camera.”

Film’s visual language is as close as it gets to mimicking naturalistic sight. Why not use that language and its terminology? – First, this presupposes that mimicking naturalistic sight is the end visual goal of comics. It isn’t. We’ve got cameras for that. Even if it were, the language of film is very, very different than the way we perceive the world around us. We don’t experience the world with “cuts” or in any sort of discrete bordered visual field.

More important to comics-making, though, is that a lot of film’s visual language is arbitrary (is cutting off the figure at the waist intrinsically different that cutting it off at the thigh? The former is an established shot in film; the latter is to be avoided in film) and a lot of it is driven by concerns unrelated to effective visual communication–concerns like budget and technology. For a perfect example of how this can affect comics negatively, see the section on “Location Staging” in this great Jesse Hamm post on Moebius. These are exactly the sorts of things that have seeped into the visual language of comics to its detriment. 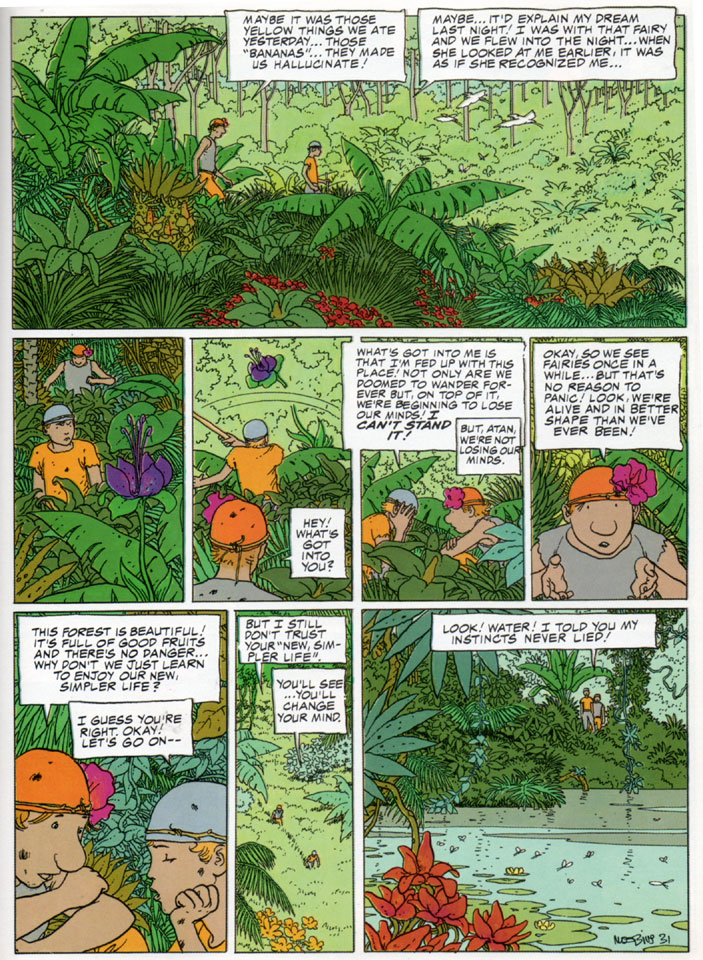 If you’re making (or discussing) mimetic narrative, film terminology works. Why not use it? – OK, <sigh> if you’re really hell-bent on strictly mimetic storytelling and you’re just talking about how to compose a particular panel, I guess this is true. On the other hand, (a) again, why is this mode of storytelling privileged over all others? And, (b) there’s a ton of other stuff you should be thinking/talking about beyond mimetic panel-level staging. If we employed other terminology and concepts more often, maybe neither of these’d be a concern.

Film has a much more developed/advanced visual language. Why not borrow from that? – Yeah, of course we comics folk can learn from film. But, don’t you wonder why film has that advanced visual language? Maybe because film practitioners and critics devoted their efforts to developing film’s own unique formal vocabulary, not aping some other medium’s?

Look, I understand that talking about “shots” and “camera angles” is an easy go-to for discussing (and creating) certain types of comics… but in the long run I think it’s contributing–at least a little tiny bit–to comics’ continued arrested formal development. I say this even as someone who’s created tons of comics that are pretty much 100% mimetic in the way they tell stories. Maybe that’s precisely why this is a subject that concerns me: I know that my comics–and all comics–could be a lot better, a lot more interesting if we all thought about comics as more than “movies on paper.”

*Yes, I’m well aware of what Fumetti is. That’s not what I’m talking about and you know it, smartass.