B is for Brienne, Maid of Tarth

A is for Ahab

A is for Ahab – from Moby Dick by Herman Melville 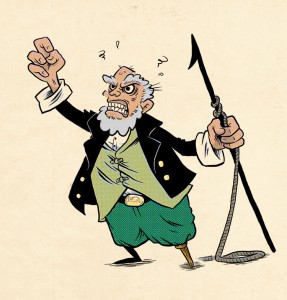 I’m glad I escaped high school without some teacher forcing me to read Moby Dick at age seventeen. I’m sure I would have hated it and never touched it again. In fact, I first read Moby Dick in my early 30s and it immediately became one of my all-time favorite books. I’ve re-read it once since then and it’s for sure on my short list of books that I’ll probably continue to re-read every so often for the rest of my life. There are a lot of passages in the book that I really, really love, but Ahab here has a line that’s maybe my favorite sentence in the English language:

The path to my fixed purpose is laid with iron rails, whereon my soul is grooved to run.

This–the conclusion of Chapter 58–is also one of the greatest passages ever written:

Consider the subtleness of the sea; how its most dreaded creatures glide under water, unapparent for the most part, and treacherously hidden beneath the loveliest tints of azure. Consider also the devilish brilliance and beauty of many of its most remorseless tribes, as the dainty embellished shape of many species of sharks. Consider, once more, the universal cannibalism of the sea; all whose creatures prey upon each other, carrying on eternal war since the world began.

Consider all this; and then turn to this green, gentle, and most docile earth; consider them both, the sea and the land; and do you not find a strange analogy to something in yourself? For as this appalling ocean surrounds the verdant land, so in the soul of man there lies one insular Tahiti, full of peace and joy, but encompassed by all the horrors of the half known life.

The illustration was penciled by hand, inked digitally in Manga Studio, and colored in Photoshop. You can find info on the color halftone/off-register effect I’m using here at the JohnnyCrossbones website.