Or, maybe instead of “is always,” I should say “should always be.” You certainly see plenty of drawings where it’s not. But, hear me now and believe me later: this is just plain wrong–or at the very least, unnatural looking.

This came up in class today, so I thought I’d do a quick post about it. A student posted a drawing in one point perspective with the vanishing point (hereafter: “VP”) about 2/3 of the way toward the right hand side of the page. Another student noted that it looked odd and wondered why. The class is not a perspective class, but I thought it was worth at least touching on. For obvious reasons, I’m not going to use my own student’s drawing for an example, but here’s a random one I grabbed via Google Image Search: 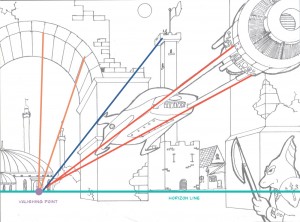 As you can see, I’ve traced back some orthogonals and located the single VP on the horizon line. It’s obviously way off-center.  Now, the drawing looks “correct” in the sense that all of the non-horizontal lines are converging to the common VP as they should, but there’s definitely something odd about this image–and it all has to do with where our imaginary viewer of this one point perspective scene is positioned.

So, Here’s the the real life situation that produces a one point perspective view: 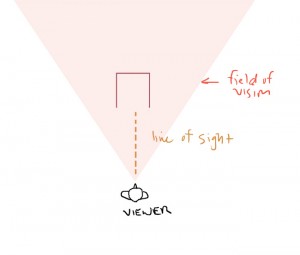 (Sorry about the slap-dash drawings. They’d have been more polished if I had known I’d recycle them for a blog post!)

To do that, what you’re doing is taking a “slice” of an (imaginary) viewer’s field of vision and transferring it to your canvas’s picture plane: 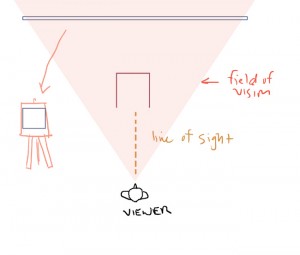 When you do that, here’s what you get: 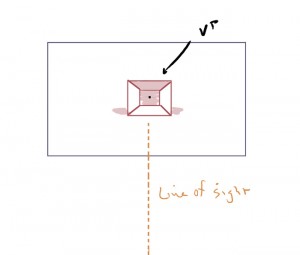 If you set up a drawing with the VP off-center like I’ve framed off in red here, you’re lopping off a part of the viewer’s field of vision and creating a view that’s not anything that a real person would ever possibly see in the real world… 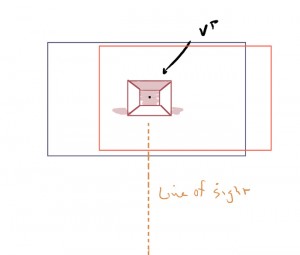 …. because what you’re doing is grabbing an odd side portion of the viewer’s field of vision and you’re leaving off a corresponding portion of it on the other side: 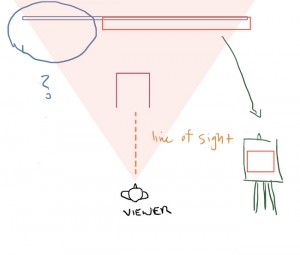 And that’s exactly what’s going on in that example drawing. The line of sight of the (imagined) viewer of the scene has to be directly lined up with the VP; and since the human field of vision is symmetrical and extends equally to our left and right, that viewer would be seeing as much visual material to the left as to the right: 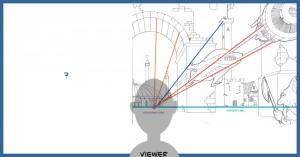 Or put another way, sort of reasoning from the other direction: what one point perspective is is a situation where an object’s vanishing point falls directly on the viewer’s line of sight. Since the viewer’s field of vision extends equally to the left and to the right of the line of sight, the VP in one point perspective is by definition in the center.

Now… that said, yeah, you often see drawings where people just arbitrarily place a single VP somewhere on the page and then start drawing. These will always look odd and unnatural, though, for the reason outlined above: that’s a view that would never naturally occur. You even see it in photographs that have been cropped after the fact.

It’s not a big no-no and frankly you see people do it all the time… but it’s worth understanding and–in my opinion avoiding–situations where the VP is off-center in one point.