Craft: A Review of the New Koh-i-nor Rapidosketch Pen

The reason I buy all of my art supplies online isn’t just because it’s cheaper: I’m a sucker for picking up pretty much any new drawing tool I happen upon in a “bricks and mortar” store.  I usually manage to avoid the temptation, but last week I found myself in the local Michael’s dropping off some things to be framed (50% off framing sale going on now, y’all!) and as a wandered through the drafting isle, I saw this–the new Koh-i-nor Rapidosketch pen:

You’re probably familiar with the Rapidograph pen from the same company.  They’re pretty much the industry standard technical pen.  I have a set, which aside from a few replaced points, is about ten years old and I use them mainly for panel borders and balloon outlines.  They are, though, not particularly great for working in a sketchbook.  The problems here are mainly two things: First, there’s inconsistent ink flow at high speeds.  When working a little more slowly, as on an original comics page, they’re perfectly fine, but for quick casual sketches they tend to “skip” pretty frequently.  Second, they can tend to really dig into the paper you’re drawing on and this can be a real problem, especially of you’re working on flimsy paper such as those Moleskine tablets that folks really seem to love.  (Yeah, sure, Robert Crumb seems to be able to sketch with them fine, but, Hell, that’s ’cause he’s Robert Crumb.  Normal people can’t sketch well with Rapidographs… trust me.)

If you’ve seen any of my random sketchbook pages I occasionally post, you know I tend to sketch directly in pen.  My normal tool of choice is the Rotring Art pen, which, in addition to having neither of the above faults, also features a “split” point which causes it to preform like a really tight crowquil, giving you just a bit of line variation.  This Rapidosketch thing, though, seemed like it was worth a try.  Based on the name, I assumed it was designed specifically for sketching–and the box even boasted the Viagra-like claim of “consistent performance,” an allusion, I assumed, to the Rapidograph’s well-known inconsistent ink flow I mentioned above.  All signs pointed to a cool new pen.

Things began to sour a bit, though, when I got home and started to investigate the pen further.

First off, it comes with no instructions.  If you’ve used Rapidographs before, this is not a big deal, but if you’re new to this stuff I can imagine it would be a bit mystifying to try to figure out–particularly since if you store them incorrectly they tend to clog up.  On a similar note, although it came in the same packaging as a Rapidograph, the little circle indentation where the circular “wrench” (for removing the pen point) would normally be  is empty.  This is a recipe for disaster, as you really need to remove the point before re-attaching a freshly-filled ink reservoir or else you’re essentially pressuring your ink through the point mechanism and you’ll be dealing with a leaky pen right off the bat. 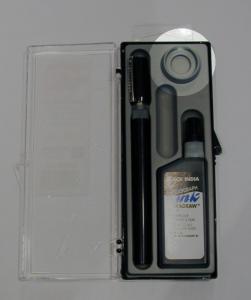 As I took the pen apart in preparation to fill it, I noticed that it’s innards looked suspiciously like the innards of a regular old Rapidograph, as you can see below: 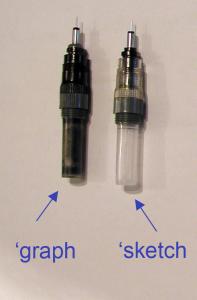 While there’s some new sheathing around the mechanism, it’s pretty similar–and my technical pens are pretty old so I may be comparing old apples with new oranges here.  Out of curiosity, I removed the points, and as you can see, they’re pretty darned similar: 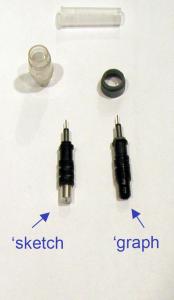 But, hey, for all I know, the interiors of those points could be radically different and the Rapidosketch could really be some new design intended for sketching!  I loaded the thing up with ink and gave it a roll.

First off, there’s no discernible difference in the line quality between this pen and a regular Rapidograph pen of the same size: 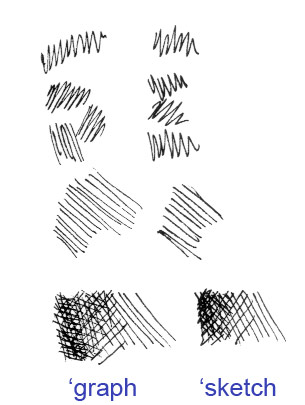 To get a true feel for the pen, I cranked out a page of sketches–my usual subjects: hands and drapery. 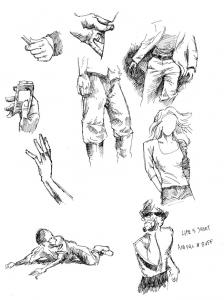 If there’s a difference between this pen and a regular Rapidograph technical pen, it’s far too subtle for me to discern.  I experienced fewer problems with intermittent ink flow than with the standard technical pen, but I’d chalk this up to my technical pen’s being nearly a decade old, not to some substantive design difference between the two pens.  Similarly, the Rapidosketch seemed just as likely to tear into the page, and–just like a Rapidograph–encountered problems working on paper with any tooth to it.

The verdict: As far as I can tell, the supposedly-new Rapidosketch pen is just a regular old Rapidograph that’s been “rebranded” with a different-colored barrel and cap–and is being marketed somewhat deceptively with the new name “Rapidosketch.”  If you’ve already got a technical pen and enjoy sketching with it, you’ll gain nothing from buying a Rapidosketch.  And if you’re looking for a technical pen that’s more suited to sketching than a regular Rapidograph, this ain’t it.